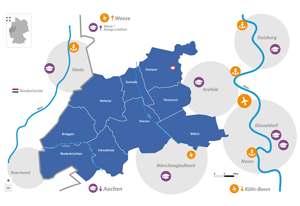 The district of Viersen is located in a prominent location deep in the west of Germany and is an emerging economic area with an exceptional infrastructure.

The district of Viersen is located in a prominent location deep in the west of Germany. The area’s infrastructure is its most exceptional characteristic. It is surrounded by a close-knit highway network with the A 40 in the North, the A 44 and the A 52 in the East and South, as well as the A 57 and the A 61 in the South-East. This network connects the district with the metropolitan areas of Düsseldorf, Cologne and Aachen, the Ruhr area, as well as with the cities of Roermond and Venlo in the Dutch Limburg province. This means that large sales but also procurement markets can be found in immediate vicinity.

Moreover, two airports (Weeze and Düsseldorf International) can be reached within a short time. The connection to the waterways is also very close. The inland ports of Duisburg and Neuss-Düsseldorf are located not far from the district. Further, the seaports of Rotterdam and Antwerpen in the Netherlands are easy to reach.

The district of Viersen is an emerging economic area. Since being founded in February 2017 it is part of the Rhineland metropolitan region.

Part of the economic development agency for the district (WFG) is the Lower-Rhine Technology and Entrepreneur Centre (TZN) in Kempen. It supports and promotes start ups and entrepreneurs with numerous offers and projects. Another focal point of the WFG is the connection of the district with the Dutch economic area. For instance, a branch of the „Fontys Venlo University of Applied Sciences“ was opened in the TZN in 2016. There the exchange between the university and the economy, as well as between Dutch and German students is promoted intensively. Furthermore, the exchange aims at advancing the transfer of knowledge between the regions.